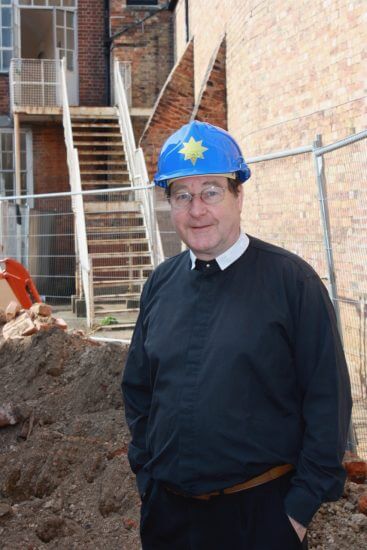 Fr Jerome Bertram joined the Oxford Oratory of St Philip Neri in 1991 early in the community’s history but relatively late in his own life. He was 41 and had already been a Priest of the Diocese of Arundel and Brighton for 12 years.

Fr Jerome studied for the priesthood at the Venerable English College in Rome and at the Pontifical Gregorian University from 1974–1978. These were interesting times for the Church, encompassing the end of the pontificate of St Paul VI, the short reign of John Paul I and the beginning of the long and influential pontificate of St John Paul II. It was a formative if not entirely happy time.

As a priest novice Fr Jerome brought the new and rather young community much valuable outside experience. But it is easy to discern some characteristically Philippine characteristics long before Jerome came to Oxford. Though he came late to the Oratory he was, to use the Oratorian expression, “quasi natus”—as if born to the Congregation. The discernment of a call to St Philip’s family, and the Fathers’ recognition of it, probably came as no surprise to those who knew him or the house.

To his family and the friends of his early life he was always known as Jeremy. His parents, Anthony and Barbara, had an interesting war—too interesting to be able to say much about it, although fascinating details did emerge in his mother’s later years.

The young Jeremy’s home at Bignor in West Sussex was never short of inspiring and eccentric company. He was born on 10 May 1950 and not long afterwards was dandled on Hilaire Belloc’s knees. His godmother was the novelist Antonia White. He was destined to be the gifted writer he became. It is clear from her memoirs that many of the interests his friends came to know so well—especially for antiquities—were present from a young age. It seems the youthful Jeremy expressed them with (sometimes overwhelming) enthusiasm.

There was a short period of schooling in the United States where Jerome’s father had a visiting lectureship. He never took too much trouble to deny the persistent rumour that he had been confirmed by the Venerable Servant of God Archbishop Fulton Sheen or that he was the cherubic altar boy in a popular illustrated religious book of the time.

After America came education with the Benedictines at Worth Abbey School. Here Jerome’s love for the Catholic faith deepened, especially for its liturgy and tradition. Monastic education brought intellectual rigour to his faith but more importantly allowed him to witness first hand the kind of life that is the fullest possible response and witness to Christ. In time Jerome came to appreciate more ancient expressions of Faith than those that were were then in vogue not only at Worth but throughout the Church—whether in architecture, liturgy or theological method. But he never lost his love for Worth (or for Sussex), delighted in taking friends and brethren on visits, and remained ever grateful.

Jerome went up to St John’s College, Oxford with a scholarship in the turbulent years of the late 1960s to read Classics, changing after a year to Theology. In spite of a professed political radicalism, Jerome was never one to value disturbance for its own sake though like many others of that generation he was not untouched by the tensions which those times generated and continue to generate.

His was a more traditional—if exceptional—university career. Friendships were formed that remained strong until the end of his life. Serious digging began on a number of important archaeological sites. (There are few who know more than Fr Jerome knew about what lies under the ground in Oxford’s streets.) There were heroic walks and punting expeditions including, one summer, a Herculean circumnavigation of Oxford by river and canal. Alone among his contemporaries he published a book before taking his degree, the first of many writings on monumental incised slabs and brasses. He was recognised internationally as an expert in the field and on the strength of it was later elected a Fellow of the Society of Antiquaries.

While at Oxford Jerome maintained his contact with the Benedictines through St Benet’s Hall and straight after university tried his vocation with the community at Worth. But the time was not yet right for community life and he transferred to the diocese of Arundel and Brighton.

Fr Jerome was ordained by Bishop Cormac Murphy O’Connor on 14 July 1979. For a man always interested in the effects of cultural revolution Bastille Day was apt. More comfortingly it is also the liturgical celebration of St Philip’s friend and penitent St Camillus de Lellis. The ordination took place in Arundel Cathedral where Jerome had been baptised. And so both his Christian life and his priesthood began under the windows of Arundel, beneath the watchful stained glass eye of St Philip Neri to whom the church had been dedicated before the canonisation of St Philip Howard.

His ministry began with a curacy in the busy south coast parish of Eastbourne. After that came suburban Worthing and the better-suited historic parish of Sutton Park. But it was in university chaplaincy that Fr Jerome really found his vocation, first in the London University Chaplaincy in Gower Street and later at Royal Holloway. Fr Jerome had an exceptional rapport with the young. So many students in both institutions—and later many more in Oxford—owe to Fr Jerome the grace of discovering, remaining in, or returning to the Catholic faith.

And so Fr Jerome came to Oxford in 1991. From the moment a man joins the Oratory there ought to be very little left to say. The life is, essentially, one of humdrum regularity, of prayer, preaching and the sacraments. In spite of his age and experience he settled with great humility into the constraints of community life. But of course there is much more.

Jerome was conspicuous in his fidelity to the routine of the house. He was also an outstanding preacher and confessor. So much hardly needs to be said to anyone who knew him. His homilies—almost always apparently extempore though in fact often quite carefully worked out on walks in the University Parks and elsewhere—could have a whole congregation holding its breath. There were countless people in the community, the parish and from further afield who sought Fr Jerome out in the confessional. None left without the consolation of his wisdom, gentleness and long experience. He was given to many small and unobtrusive but deeply appreciated acts of kindness.

Meanwhile his other work continued, his writings seemingly endless, but now broader in scope: the history and spirituality of the Oratory; spiritual and scriptural works born of retreat giving; accounts of his travels; influential and important work on the history and possible future of communal life of the secular clergy; practical guides for those interesting in establishing Oratories. This really is to name only a few.

In the community he served at different times as Treasurer, Novice Master, Librarian and Prefect of Buildings. He was instrumental in overseeing the construction of two major new buildings for the Oxford Oratory, the Porter’s Lodge and the new accommodation and library. The excellence of the library’s holdings is also largely Fr Jerome’s work. He was the Procurator’s Delegate for the Oratories in Formation in Manchester and Port Elizabeth South Africa where he spent some months. Closer to home, his concern for Oxford’s homeless found practical expression when he became a founder member of the Oxford Poverty Action Trust.

The travelling continued almost to the end. There are few European countries which Jerome did not visit and write about. He never owned a mobile telephone so the contact details, left on the community board when he went away, were a source of endless amusement to the brethren. (It was never necessary, thank heavens, to have to contact him at Herr Grüber’s boatyard in Bremen!) There could be strange gaps in dates and places. Jerome would disappear in one place and reappear some days later in another, often on the other side of a mountain range. He delighted in being off piste and off the radar. Cryptic postcards would arrive with exotic stamps much like those which must have come to his parents at Bignor in the dark days of the war.

In spite of all that, when Jerome came to Oxford he was at last at home and settled. He loved the family life of the Oratory. His many friends knew where to find him and they did. Jerome could never quite believe how much he was loved and appreciated. He was always inclined to depression and pessimism about himself which he was mostly successful in hiding. Only in the last months of his life did this change. He seemed at last to relax in the evident love and attention he received from the friends who knew they were soon to lose him. Even in his final days in the hospice at Sobell House, where he received wonderful care, he inspired love and affection from the staff who only knew him at the very end. He continued to pray, to hear confessions and to give blessings. He never made a fuss. As one of the brethren put it, he taught us how to die. He was a priest and a son of St Philip to the last.

The first sermon Fr Jerome preached in St Aloysius’ Church, was on All Saints’ Day in 1990. It was one of his first visits to the community. His subject was the empty niche on the side of the house in front of the church. His point was that it is there for each one of us. The Lord has prepared a niche for each one of us in heaven. We are blessed that Fr Jerome found a niche in the Oxford Oratory. We are confident that, his earthly labours ended, the Lord’s mercy will grant him a niche with St Philip and with St John Henry whose canonisation he just lived to see.

Fr Jerome Bertram died on Saturday, 19 October, 2019, the Feast of St Frideswide, Patron of Oxford, in the seventieth year of his life, the forty-first of his priesthood, and the twenty-ninth in the habit of St Philip.

Eternal rest grant unto him O Lord, and let perpetual light shine upon him. May he rest in peace.