New Year's Day with the Sisters of the Blessed Virgin Mary 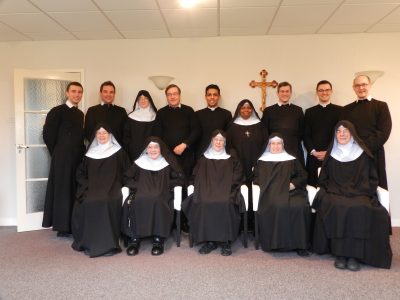 It is five years since the Sisters of the Blessed Virgin Mary were received into the Catholic Church, on New Year's Day 2013 in our church. Since then they have settled in a convent at Kingstanding, next door to Maryvale. Indeed their house is built in the grounds that Blessed John Henry Newman would have known when he lived at Maryvale and founded the English Oratory there at Candlemas 1848.

Mother Winsome and the Sisters kindly invited us to go up to see them on the anniversary day of their reception, and the Fathers and Brothers all had a very happy time. At the end of Mass in their chapel, the Sisters sang the Suscipe, which is a reminder of their vows and the formation of their community within the Catholic Church on 1st January 2013.