The Saints of North Wales 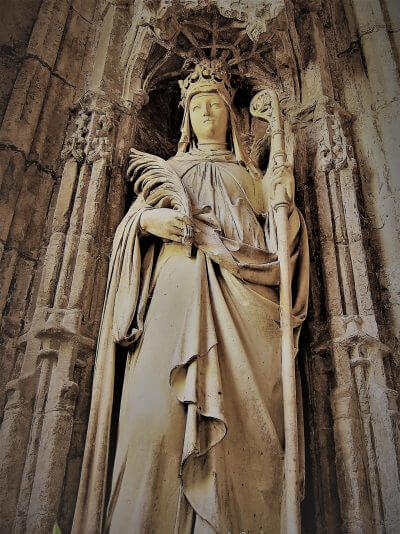 A group of intrepid parishioners went off last week to North Wales, on pilgrimage to Holywell, the shrine of St Winefride. 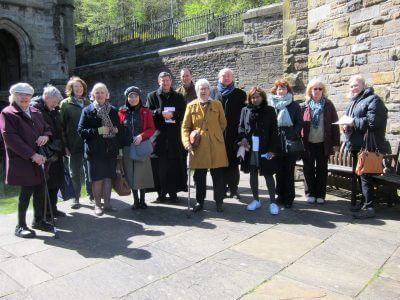 Winefride was a seventh-century Welsh princess, who was brutally attacked by the evil Caradoc, while she was alone. When she bravely resisted his advances, Caradoc cut off Winefride's head. However, her uncle, St Beuno, restored her to life: hence Winefride is known as the 'Welsh Lazarus'. Caradoc was swallowed up by the earth, but a spring appeared where Winefride's head had landed, and pilgrims have been coming continuously to seek grace and healing there for 1.300 years, without interruption.

In the sixteenth century, Lady Margaret Beaufort prayed at Holywell that she might conceive. She had a chapel built in honour of St Winefride above the well.  Margaret Beaufort was the mother of King Henry VII, and this is possibly why the next Henry did not entirely destroy the shrine.

The beautiful structure of the well survives to this day, and even at the worst times of persecution, Catholic pilgrims have never stopped coming: 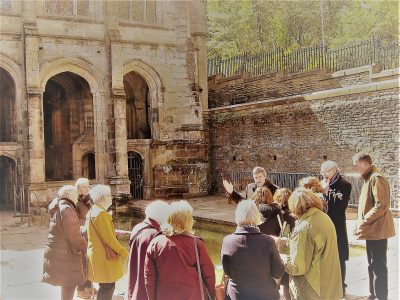 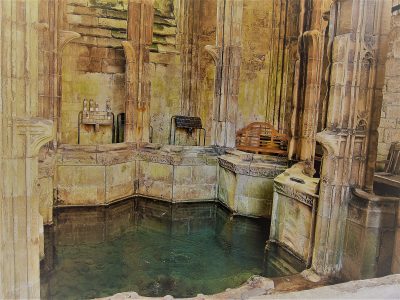 Here our pilgrims to 'The Lourdes of Wales', pray the litany of St Winefride at her well: 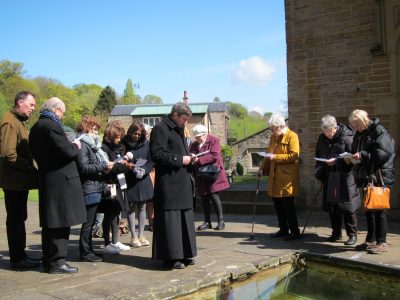 We visited the waters three times, since St Beuno told his niece to sit upon a stone, so that all who came there would receive whatever they asked, "If not the first time, then on the second or the third". 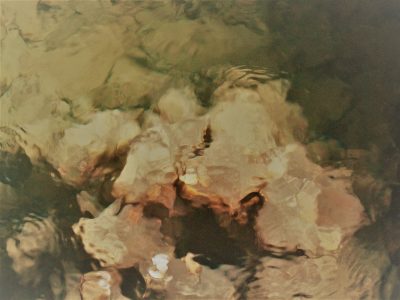 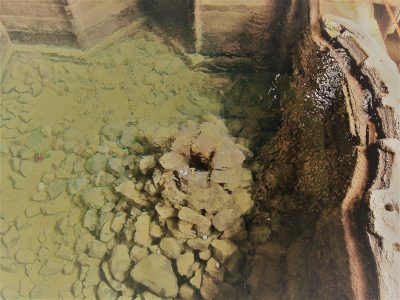 The Chapel of St Winefride above the well is sadly not much used, but we were given the key to go inside: 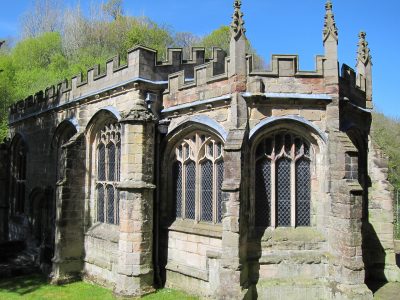 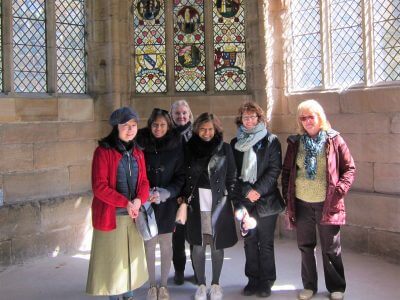 The Bridgettine Sisters have a convent and guest house at Holywell, and we were delighted to stay there, right next to the shrine. One day, Sister M. Claudia gave us an inspiring talk about St Bridget of Sweden, her devotion to the Wounds of Christ, and about the life of the Bridgettine Sisters today: 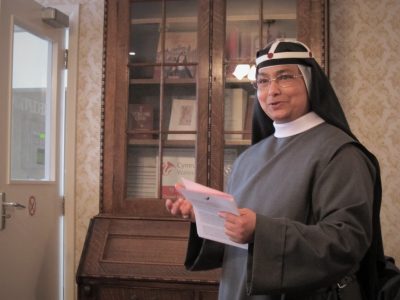 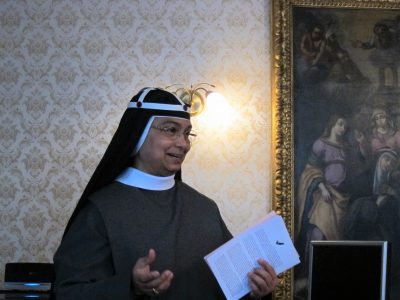 We also explored some other holy sites of North Wales, including St Asaph's, where is found Britain's smallest ancient cathedral. St Asaph came down from Scotland with St Kentigern (Mungo) to evangelise the Welsh in the sixth century.

St Beuno's Ignatian Retreat Centre is run by the Jesuits, and we were pleased to catch up with Fr Roger Dawson, S.J., former assistant Chaplain to the University. 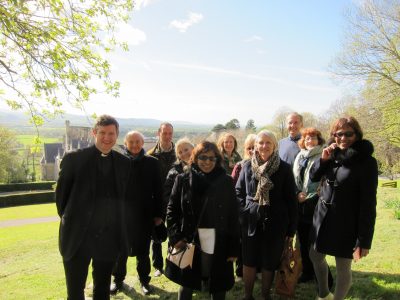 Fr Roger kindly showed us the magnificent gardens of St Beuno's, with the view of the Clwyd Valley, the sea, and over to Snowdon. 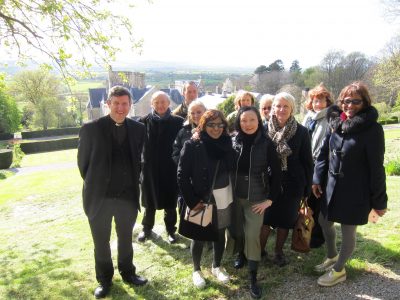 Fr Gerard Manley Hopkins S.J., spent time at St Beuno's (he was later curate at St Aloysius', Oxford) and wrote 'The Wreck of the Deutschland' there.

Another day, we went to Pantasaph, where the Capuchins have a retreat house. Again we met up with old friends, including, in the St Pio's Cafe, Fr Pashcal Burlinson, O.F.M. Cap., who was Parish Priest of Greyfriars in Oxford for twenty years. He gave us an impromptu, and fascinating talk about Padre Pio, and the history of Pantasaph: 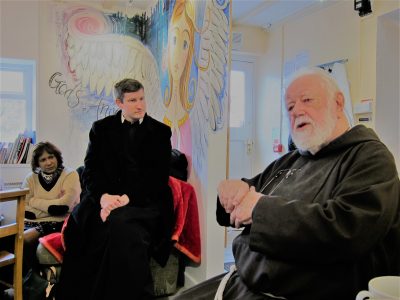 St David's Church, Pantasaph was built by the Earl of Denbigh after his conversion to the Faith, and designed by Pugin. We were able to celebrate Mass in this fine building: 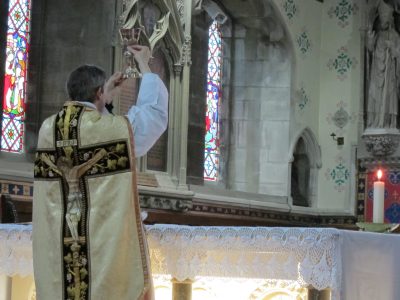 Pantasaph also has a magnificent Calvary, outdoor Stations of the Cross and a Lourdes Grotto, so we were kept fully occupied with our devotions: 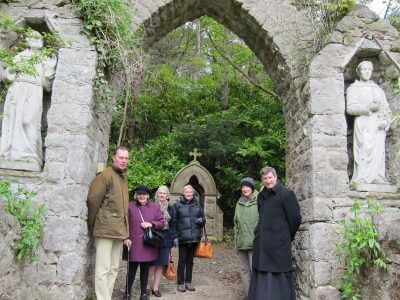 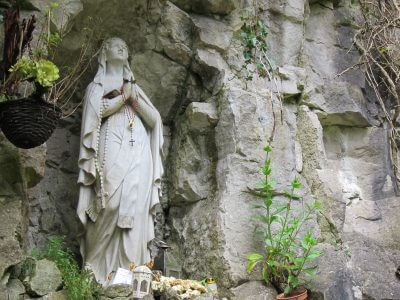 There was also some time for frivolity: 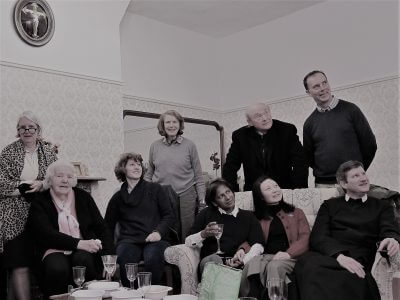 On our last day, the sisters kindly allowed us to venerate the relics of St Bridget and Blessed Elizabeth Hesselblad, who revived the Bridgettines in the nineteenth century: 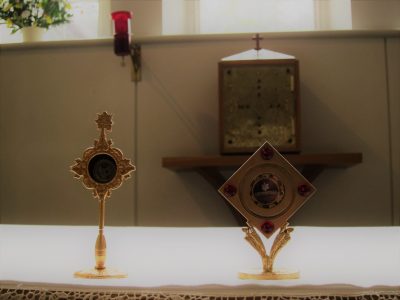 On our way home, we visited Shrewsbury Abbey, where the relics of St Winefride were transferred in 1037. 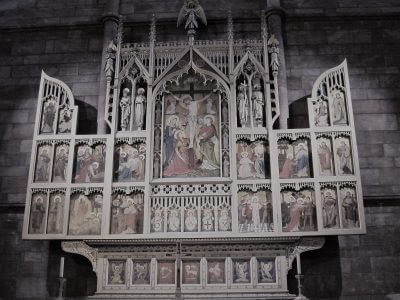 A small fragment of the original shrine remains:

St Winefride - pray for us. 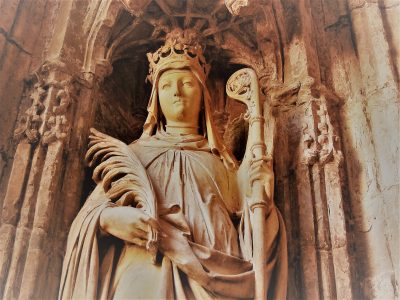