Yesterday Fr Aldo Tapparo, Parish Priest of Charlbury, preached the following sermon for the Solemnity of the Immaculate Conception: 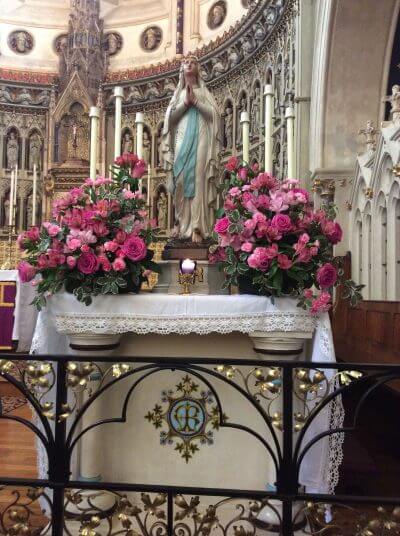 In his meditations on the Litany of Loreto, as he reflects upon the invocation Virgo Purissma, Most Pure Virgin, Blessed John Henry Newman speaks of Original Sin as “That which belongs to every one of us, and is ours from the first moment of our existence, and is the sin of unbelief and disobedience by which Adam lost Paradise.”  And then he goes on to say “But Mary never was in this state: she was by eternal decree of God exempted from it” and this is what we celebrate tonight, Mary's Immaculate Conception. A fact, that so many people, Catholics included, misunderstand. For a moment, then, let us  refresh our understanding and belief in this dogma of our Faith for it speaks to us not only of the Blessed Virgin Mary but also of our lives of faith as well.

In pronouncing and defining the Immaculate Conception Blessed Pope Pius IX said of our Blessed Lady “In the first instance of her conception, by a singular privilege and grace granted by God, in view of the merits of Jesus Christ, the Saviour of the human race, was preserved exempt from all stain of original sin.”  And by defining this in the way in which he did, he makes it quite clear that the essence of original sin was not removed from Our Lady's soul- as it is removed from our souls through the Sacrament of Baptism. No, that stain of original sin was excluded from her soul, it was never in her soul and so from the moment of her conception the state of original sanctity, the state of innocence and justice, was conferred upon her. She was conceived in a natural way as her parents, St Anne and St Joachim joined together, but at the moment of her animation, at the moment of the creation of her soul and its infusion into her body, her blessedness was obtained through the redeeming Saviour.  Her redemption, then, was the very masterpiece of Christ's redeeming wisdom.

Looking through the history of the Church concerning Our Lady's Immaculate Conception there were theological difficulties even for some of our great theologians but it was Blessed John Duns Scotus who moved towards the solution to the problem with the view that Our Lady's redemption was preservation not rescue from Original Sin and her freedom from sin was due to Christ.  Centuries later, and several years before the definition,  the apparitions to St. Catherine Labouré led to the striking of the Miraculous Medal showing Mary 'conceived without sin'. And four years after the dogma had been defined St. Bernadette, at Lourdes received the visions of Our Lady who identified herself as the Immaculate Conception and this was seen as a heavenly endorsement of  what had been proclaimed.  It might be surprising to hear that the Koran has more references to Mary than our own Scriptures and one of its chapters, chapter 19, deals with her and refers to her as 'Virgin, ever Virgin' and one of Mohammed companions, whilst not speaking in the terms of the Immaculate Conception says: "I heard Allah's Apostle saying: 'There is none born among the off-spring of Adam, but Satan touches it. A child, therefore, cries loudly at the time of birth because of the touch of Satan, except Mary and her child." Muslims, it has to be said, do not speak of Original Sin, but the fact that they clearly state that our Blessed Lady was not touched by Satan shows, beyond doubt, their belief that both Jesus and Mary, without question, were sinless.

The first reading of our Mass this evening speaks to us of another woman.  And that woman is Eve.  She like Mary was without sin, not, as Blessed John Henry says, exempted from it but one who came into being before the great fall of humankind, before sin entered the world.  Whether born before it or exempted from is neither here nor there. The important thing to remember is that Eve, like Mary, were both in a sinless condition as they came to live out their lives. But what a difference their lives turned out to be!  Sinless as Eve was she did not resist, even with the graces that she had, she did not resist the wiles and temptations of the serpent and as a consequence, she took the forbidden fruit of the Garden thereby destroying the peace, the tranquility and the harmony of creation, whereas Our Lady, with those very same graces, brings to birth the bringer of the New Creation, the Saviour of the World and this is why from as early as the second century she has been recognised and hailed as the Second Eve.  Now whether we look at the writings of St Ephrem the Syrian, St Gregory Nazianzen, St Augustine, St John Damascene and many other Fathers of the Church, all are of the opinion that Mary was the sinless one She was and is “a sublime creature, filled with spiritual treasures”1 and it was these treasures that enabled her to say at the Annunciation 'Fiat'. That sinless and spotless woman could say to the pure Angel “I am the handmaid of the Lord, let what you have said be done to me”.

Her loving obedience to the will of God, then, is for you and me both an example and a challenge.  We may well have been born with Original Sin and are deprived of original holiness and justice, our faces  turned away from God but, as I have already said, the Sacrament of Baptism, by imparting the life of Christ's grace, erases Original Sin and turns us back towards God even though we are still destined to battle against the human frailty which remains, subjecting us temptations.  But the Immaculate Conception of Our Blessed Lady enables us to glimpse at what God wishes for us all.  Her life reveals that far from hiding her from the joys and pains of human existence, her Immaculate Conception led her into the depths of the mystery of human life and suffering. And it is there that you and I still find her, waiting for us and wishing to show us that with the help of God's grace we might triumph, as did she, in that ongoing battle. For she, as the Preface of this Mass tells us, is an advocate of grace and a model of holiness.  And the counsel that she gives us to help us in our daily striving for holiness is quite simple, for she tells us, as she those servants at Cana in Galilee: “Do what ever he tells you”.