Here is the text of the sermon preached by Fr Julian Large, Provost of the London Oratory, at our celebration of St Philip's Day on 27th May:

We English Oratorians can trace the roots of our various communities to friendships that were formed within the walls of the sublimely beautiful Oxford of the 19th Century. Much has been made in some quarters of the strains that came to characterise the friendship between those two oxonians Newman and Faber. But ultimately even this has proved to have been a creative tension. For one thing it served early on to make concrete our consciousness of the individual autonomy of each Oratorian house, which is such an essential feature of our institute, and which does sometimes need to be reaffirmed against an ecclesiastical culture that favours centralisation. And today the houses that were established by those two great founders and this house, which via Birmingham, belongs to the branch of the Oratorian family begun by Blessed John Henry, enjoy together a relationship which is a truly flourishing and fruitful friendship. Oratorians never preach about themselves. But I have to mention the great happiness I felt when I received the invitation from Father Daniel to come and give this sermon on our holy father’s feast day, even if it is slightly terrifying to be preaching to a such a distinguished congregation that contains at least two of my old tutors. I come laden with the fond wishes of all of the London fathers.

As for Fathers Newman and Faber, Heaven is the ultimate venue for reunions, where misunderstandings that occurred between the saints on earth are resolved for eternity. It is probably safe to assume that Blessed John Henry and Father Wilfrid Faber are by now merrily united in perfect friendship at the Throne of Grace, in the presence of our holy father St Philip, with all three of them looking with a special love and care on this Oratory, which is a such a beacon of Catholic charity and truth in Oxford.

Observing St Philip's life as a layman, his work as a priest while the new Congregation of the Oratory crystalized around him, and his influence on the papal court and Roman society, one is struck by the role that friendship played throughout his long and extraordinary apostolate- so much so that to this Christian Socrates, this Winning Saint and this Gentle Guide of Youth, we might add yet one more title- the Apostle of Christian Friendship.

Perhaps friendship has taken on something of a shallow meaning in the modern age, when it is so often associated with utility and pleasure. Nowadays there is a tendency to think of friendship as not much more than a useful prop to support and comfort a man as he makes his way in life. To understand how friendship was so effective in St Philip's apostolate, we have to realise that his understanding of friendship was nourished by a formation in the classical and Christian traditions. In the saint's bookcase at the Vallicella, we find a well-worn edition of the works of Aristotle, and his early biographer Bacci relates that "in theology, he always followed the teaching of St Thomas Aquinas, for whom he had a special love and devotion, having the Summa almost always in his hand."

For Aristotle, true friendship is a settled disposition, a habit, based on virtue. The good man wishes what is good for his friend and this is reciprocated, and both combine their talents and resources in order to work for the benefit for the polis, or as we might say today, for the common good. In this classical view, real friendship can only ever be established between equals. Indeed, Aristotle even says that becoming gods is the one good that we should never wish for our friends, because then we should certainly forfeit their friendship. For St Thomas, however, friendship with the one true God is made a very real possibility by means of the grace that is poured into our hearts in Baptism. Through this Sanctifying Grace, we are grafted on to the vine which we heard about in the Gospel appointed for this feast, so that the very life of Christ animates the Mystical Body of which we are now members. God having shared His divine life with us, we are able to live in friendship with Him. It can even be said that friendship with God is really the essence of the Christian life.

In our saint's life, we see how readily he forged friendships with other virtuous men. One of his most profound was with Nicholas Gigli, a Frenchman who like Philip left his native country never to return and served as a priest for twenty years at the Roman Oratory, where he spent every spare moment in the confessional. Philip called him the "Flower of Purity" and, in his last illness, insisted on waiting on him and attending to all his needs. After Gigli's death, the saint was seen weeping over his body in the church when he thought no-one was watching and covering the face with kisses, and he stipulated that, when he died, his heart should be buried at Gigli's side as a mark of the special affection that existed between them.

Despite this capacity for giving and receiving affection, Philip always maintained a certain detachment in his earthly friendships. His evenings were never spent chatting into the late hours with bosom companions, but rather alone, communing with his divine Friend under the stars in the loggia which he built on top of the house. The most important friendship in Philip's life was always that which he nurtured in solitude with his Saviour. The tears that soaked Gigli's dead body were not the tears that flow from the pain of bereavement. They were tears of joy, interspersed with laughter. Philip was not mourning the loss of his friend, but rather he exulted at the thought that the virtuous Frenchman was now enjoying the fullness of friendship with God in eternity. St Philip was so sure of his friend's place in Heaven that he always kept something of Gigli's on his own person as a relic.

Philip's driving motivation was to bring others to that sanctity which can be understood in terms of living in profound friendship with God. An absolute prerequisite for this, in his eyes, was to help men to be humble, because for St Philip humility is an essential foundation for all of the blessings God wishes to build in our lives. He had a horror of anyone taking himself too seriously, and if someone were to be a friend of St Philip's, he or she would have to be prepared to become the laughing stock of Rome. With this in view, St Philip never tired of inventing new devices to mortify any self-regard that might be lurking in the hearts of his best loved friends. The highly sensitive Father Gigli was once ordered to feign drunkenness in front of a delegation of highly distinguished visitors to the Oratory. Towards the end of his life, poor Gigli would say: "I have no honour left. The Father has taken it all from me." His spiritual children were willing to tolerate such embarrassments, and to return for more, because they knew that Philip loved them, and that his aim was to remove every obstacle within them that stood in the way of them realizing their potential for perfect beauty of soul. The most tender and touching testimonies in the cause for the saint’s canonization come from those who suffered his most outlandish mortifications.

Philip excelled in making hearts receptive to the vocation to live as friends of God. As men began to be drawn to the Oratory, the spirit of Christian friendship which they discovered there secured many conversions. Philip's joyful influence fostered a sense of belonging in which men found pleasure in each others company and were encouraged to assist each other in living virtuously. A shy cobbler whom Philip spotted sitting at the back of the exercises was summoned to the front and hugged like a long lost child returning to his relations. The new family into which he found himself adopted included princes and future popes. A watch-seller facing bankruptcy suddenly found himself overwhelmed by eager customers at the Oratory- Philip's friends having been primed to come to his assistance. This infectious spirit of generosity and charity was fostered by visits to the poor in the hospitals. Charitable works are always a force for social cohesion at the Oratory, as virtuous friendships are consolidated in pursuit of the common good.

If friendship with God was inconceivable to Aristotle, the idea of extending friendship to enemies was also a contradiction in terms. This is because friendship must always be reciprocated. In the Christian view, however, the seemingly impossible once again becomes a reality through the action of grace. St Philip suffered various persecutions during his apostolate. One of two things tended to happen to his oppressors: either they came to a grisly end, through no action of Philip's; or their hearts were softened because while they abused him Philip insisted on treating them like friends. Monsignor Ronald Knox, an Oxford man with a great devotion to St Philip, once explained in sermon: "one who shows bitter enmity towards a saint, speaks evil of him, persecutes him, is to the saint simply a friend who is being tiresome; it's a sort of tiff between lovers that is bound to blow over." Monsignor Knox continued: "I know the lives always tell us the saints loved their enemies as instruments of their own mortification; and I dare say it's true, but that's not all the truth. They didn't love them for being instruments, they loved them for being men.” If we wish to see this principle in action, there is no better place to look than the life of St Philip. When one youth turned up to make fun of the Oratory in 1562 and persisted in ridiculing the exercises for months on end, Philip insisted that no harsh word should be spoken to him. Eventually the young fellow was captivated by Philip's unceasing kindness and prayers. He repented and became utterly devoted to Philip, before eventually entering the Order of St Dominic. The charity and patience that he encountered in the Oratory had prepared him to open his heart to the vocation to that divine friendship which is the life of grace.

St Philip shows us, then how the Oratory is to be a school of Christian Friendship - a place of warmth and welcome, where virtue is cultivated and encouraged, always with a supernatural end in view- friendship with God, and ultimately, everlasting friendship with God in Heaven.

The London fathers are in a good position to know that the spirit of that first Oratory is alive and kicking in Oxford today. A number of people who have ended up working in London and who come to us for the sacraments have told us that their Catholic faith was re-awakened in them, or ignited in their hearts for the first time, here, at the Oxford Oratory, while they were undergraduates or graduates. And three of our younger fathers in London are priests today largely thanks to the encouragement and support that they found in this school of Christian friendship. For that, we offer you our profound thanks. And we ask our holy father St Philip to pray for all of us. 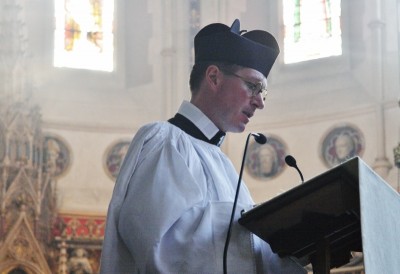