News > Archive > Sermon from the Feast of Blessed John Henry Newman, our Cardinal

Sermon from the Feast of Blessed John Henry Newman, our Cardinal 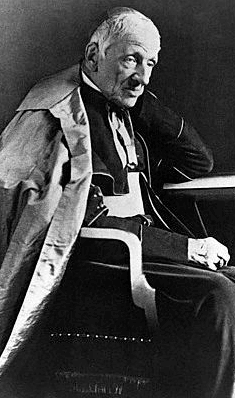 This is the text of Fr John Saward's sermon, preached at the High Mass on 9th October:

‘The words of St Paul:
‘Be not conformed to this world’.

+ In the name of the Father and of the Son and of the Holy Spirit. Amen.

Blessed John Henry Newman was a fighter, always a fighter. He found ‘peace’ in the Catholic Church, as today’s Collect tells us, but it was not the world’s easy peace. The peace that Newman experienced in the One Fold of the Redeemer was the peace hard-won by the Redeemer on the Cross, a fruit of the Holy Ghost, the peace of a mind resting in the fullness of faith, of a heart obedient to God, a peace you can know even in the heat of battle if you are true to Christ the King. Newman was a fighter, as all the saints were, as you and I are called to be from our Baptism, and by the grace of our Confirmation. ‘A fight [said Newman] is the very token of a Christian. He is a soldier of Christ; high or low, he is this and nothing else.’ Christians have a work to do in this world, and also a spiritual war to wage.

Who, then, were the enemies of this great hero of ours? Why, ultimately, the foes of every human soul in every age - the world, the flesh, and the devil – foes that should be well known to us all. No Christian ought to be insensible to the attacks of the devil and his demons, the fallen angels, against whom, as the Apostle says, we must fight with the whole armour of God, and in the strength of the risen Christ. Nor should we need reminding of the flesh, that is, the infirmities of our fallen human nature, the wounds in the powers of our soul. But in this modern age, certainly for the last fifty years, in the era of a confusing ‘opening to the world’, many Catholics have become forgetful of the Christian’s duty to fight the world. We need to hear again the Apostle’s command, Be not conformed to this world, with its echo in St John, ‘Love not the world’, with its source in the words of the incarnate Word, who warned His disciples that the world would hate them, as it hated Him, but urged them to ‘be of good cheer, because [He had] overcome the world’.

What is ‘the world’ that, according to our Lord and His Apostles, Blessed John Henry Newman and all the saints, is our enemy? Not the material universe, which was created good and beautiful by God, even if now it is bleared and smeared by human and demonic sin. Not the world in the sense of mankind, for ‘God so loved the world that He gave up His only-begotten Son’ for its redemption. No, as the Fathers explain, the world as enemy, the world of which Satan is the prince, is the world of the worldly, those who live as if this world were the only one and reject the Word of the Cross as foolishness. In every age, even in societies ostensibly Christian, the worldly are the ones who run the show, the powers that be, the movers and shakers, the opinion-formers, Mr Worldly Wise and his friends in the media. The world so defined, says Newman, is ‘the confederacy of evil’, and in all his preaching, whether at St Mary’s or in the Oratory, he exhorts his hearers with vigilance and intelligence to resist it. There is ‘an eternal enmity [he says] between the Church and the world ... Beware lest the world seduce you ... And you will be seduced most certainly, unless you watch and pray that you enter not into temptation’. ‘Whoso will be a friend of the world [says the Apostle] becomes an enemy of God’.

Throughout the history of the Church, especially in the modern age, the world has enticed many Churchmen, especially theologians, into compromise. Back in the 1960s Eric Mascall said that what shocked him most about the so-called ‘radical’ theologians was their ‘sheer social conformism’. Whatever the world demands, they supply. One form of this conformity to the world is what Newman called ‘Liberalism in Religion’, what St Pius X would condemn as Modernism, which reduces faith to a sentiment, abandons reverence for objective truth, and makes tolerance the only virtue. Then there is ‘the Religion of the Day’, the religion of the ‘tame Church’, in Newman’s phrase, as distinct from the Church Militant. The Religion of the Day, bland and undemanding, lets the world do its deadly work unchallenged and unchecked. ‘It has taken the brighter side of the Gospel, [says Newman in the pulpit of St Mary’s] its tidings of comfort, its precepts of love; all darker, deeper views of man’s condition and prospects being comparatively forgotten ... Everything is bright and cheerful. Religion is pleasant and easy; benevolence is the chief virtue; intolerance, bigotry, excess of zeal, are the first of sins ... Even firmness is looked on with an unfriendly, suspicious eye.’ The opinions Newman satirizes are familiar to us. The Religion of the Day has never gone away.

God in His wisdom and love has given us John Henry Newman’s example, teaching, and prayers as an armament of special effectiveness for the spiritual combat of today. His is a theology, as Father Louis Bouyer once said, ‘for times of general apostasy’, the times we live in. Newman understood that all the pseudo-theological capitulations to the world – Liberalism, Modernism, and the Religion of the Day – are in the strict, apostolic sense anti-Christ. According to these heresies, there is nothing from which modern man needs to be saved, or at least nothing he cannot master by his own powers, and so there is no need for God Incarnate as Saviour. Conformity to the world is a theoretical and practical contradiction of our Lord’s words in this evening’s Gospel: ‘Without me you can do nothing.’ If you love the world, you cannot love Jesus and abide in Him.

John Henry Newman was received into the Church in the month of our Lady and her Rosary. Under God, she is our chief help in spiritual warfare. In her humility, purity, and fidelity to the truth, she is terrible to the devil, like an army in battle array, and a perpetual defiance of the world. ‘Her Son will deny her nothing that she asks; [writes Newman] and herein lies her power. While she defends the Church, neither height nor depth, neither men nor evil spirits, neither great monarchs, nor craft of man, nor popular violence, can avail to harm us; for human life is short, but Mary reigns above, a Queen forever.’ Her Immaculate Heart will triumph over the father of lies. Her Son and God has overcome the world.