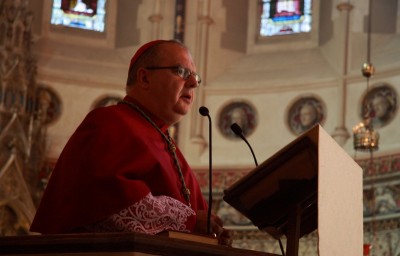 I have to say that it really does seem like yesterday that the two young Oratorians from Birmingham arrived here in September 1990 and stood in this pulpit to announce that the parish was under new management! A lot of water has passed under the bridge since then and God’s providence has placed us in different places than we expected but thank God St Philip’s work continues here and we pray that it will do so for many years to come.

Today we are here to give thanks for the many gifts God has given us through St Philip. I remember Archbishop Maurice saying that in founding the Oratory he wanted a distinctively Catholic institution in Oxford. 1990 was Newman’s centenary year and God’s providence brought the Oratory here to the city Newman loved. As a community we have many people to thank for their support and generosity both in the parish and beyond its bounds. So many have given us an enormous amount of support in so many ways both spiritually and materially. As a former Provost and on behalf of the present community I would like to record our thanks all those living and dead who have helped to bring the Oratory to life here. There is one person I should mention by name and that is the late Archbishop Maurice Couve de Murville. It was his courage and foresight that has made possible what you see today. We couldn’t have done it without him and the Oratorian community remains ever grateful for his support and the more than generous gift of this property. Our thanks should also be given to the Birmingham Oratory for their generosity in initially giving three members of its community and financial help to begin this venture.

People sometimes say to me how wonderful that the community here in Oxford has achieved so much in such a short period. I do know that it has been hard work but I am sure that the Fathers here would agree that it is God who has done the real work. People often ask, “Well what is your pastoral plan in the Oratory?” At which point I look blank because St Philip’s way is not one of programmes and targets but of being a fisher of people. Meeting people where they are encouraging, befriending and teaching them to love God. There is no formal plan or theory but as the Blessed Cardinal Newman said:

“St Philip preferred to yield to the stream and direct the current which he could not stop of science, literature, art and fashion and to sweeten and sanctify what God had made good and man had spoilt. He perceived that the mischief was to be met not with argument not with science not with protests and warnings…. But by the great counter balances of purity and truth.”

For me at any rate the role of the Oratory is not to be in the vanguard of protest and ecclesiastical controversy but simply to make people saints in their own homes and constantly to remind people of the infinite riches of God’s love and mercy. Traditionally this has been done, as it is here in Oxford today, through prayer, preaching and the administration of the sacraments especially that of Confession. This of course includes the careful celebration of the liturgy using the best of the musical and cultural traditions of the Western Church.

So when we arrived here twenty-five years ago we did what we had learnt from the senior fathers in Birmingham. In turn they had learnt it from Newman who in turn had been taught by the Fathers of the Roman Oratory whose memory and living tradition in the time before the Risorgimento went back directly to the time of St Philip.

As we heard in the first reading the Apostles were joined in prayer with our Lady and great things happened through their unity and faith. The Venerable Cardinal Baronius wrote that St Philip’s first disciples (of which he was one) were united together by prayer and charity like the first disciples and fervent to spread the Good News. In a recent insightful letter of our Holy Father Pope Francis on the 500th anniversary of our founder’s birth, he said:

“St Philip Neri also remains a luminous model of the Church’s on-going mission in the world. The perspective of his approach to neighbour in witnessing to all to the love and mercy of the Lord can serve as a valuable example to bishops, priests, consecrated people and lay faithful. Since the very first years of his life in Rome, he exercised an apostolate of personal relationships and friendship, as the privileged way to open people to the encounter with Jesus and the Gospel. His biographer thus attests: “He approached in a simple fashion, now this one, then that one, and everyone quickly became his friends”. He loved spontaneity, avoided artifice, and chose the most entertaining ways to educate in Christian virtue. At the same time he proposed a healthy discipline which entailed the exercise of willingness to receive Christ concretely into one’s life. His deep conviction was that the path of holiness is rooted in the grace of an encounter — that with the Lord — accessible to whoever, of whatever status or condition, receives Him with the astonishment of children.”

Friendship with God and those around us, prayer, the Mass, Confession and works of mercy are at the heart of the Oratorian witness to the universal Church. Surely this places the sons of St Philip at the very heart of the new evangelisation and the forthcoming Year of Mercy.

St Philip is a saint of the New Evangelisation in that he rekindled in those who had grown lukewarm in their faith of the riches of God’s friendship in a profoundly personal way to the people of Rome who were forgetful of God. His constant use of the Confessional until the day of his death is another indication to us that the mercy of God is there for the asking and that the gift of God’s mercy is a unique in each individual. I am convinced that St Philip’s way is a one which is ever more relevant for the future of the Church and thank God his work continues here and in many more places not only in this country but around the world. I ask you today to pray that St Philip’s work will continue to flourish in Oxford and I ask you to pray especially for vocations to this Congregation.

As a footnote I would like to take this opportunity to thank Archbishop Bernard for his constant support of the Oratory both here and in Birmingham and to Bishop William too for his kindness and friendship to the community over the years.