The visit of the Relics of Blesseds Louis and Zélie Martin

Father Daniel went to preach at one of the Masses at Holy Trinity, Dorchester, for the visit of the holy relics of Blessed Louis and Blessed Zélie Martin, the parents of St Thérèse of Lisieux.

A picture of the casket containing the relics during an earlier stage of the visit in Plymouth Cathedral: 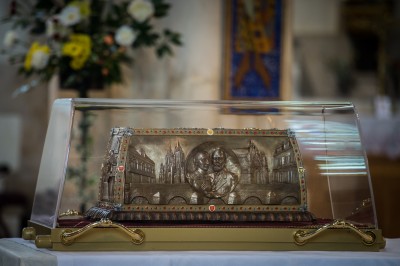 Shortly after his ordination, Bishop Mark O'Toole wrote to Lisieux to invite the relics of Blessed Louis and Zélie Martin, the parents of Saint Thérèse of the Child Jesus of the Holy Face, to visit the Diocese. They are the first parents of a saint to be beatified, and the the first spouses in the history of the Church to be proposed for sainthood together. Zélie and Louis are an inspiration to the families of today. Each owned a small business and worked hard while raising a large family.

In the 19th century this two-career couple faced the challenges we face in the 21st: finding good child care; achieving professional excellence; operating a profitable business; caring for aging parents; educating a special-needs child; forming their children in the faith; finding time to pray and to be active in their parish.

Devout Catholics, they saw Christ in the poor and worked for a just society. In 1877 Zélie died of breast cancer, leaving Louis a single parent with five minor daughters to bring up. Later Louis was diagnosed with a form of dementia (cerebral arteriosclerosis) and spent three years in a psychiatric hospital.

Like us, Louis and Zélie could not control their circumstances. Life came at them unexpectedly, just as it comes at us. They could not prevent their tragedies: the Franco-Prussian war, when they had to house nine German soldiers; the infant deaths of four of their nine children, one from abuse by a wet-nurse; their painful diseases; Zélie’s premature death. Nor could they escape their responsibilities as business owners, caregivers, spouses, and parents. Their genius lay in how they accepted what happened to them: they accepted their own powerlessness, that God might be all-powerful in their lives.

They taught the same radical openness to their youngest daughter, Thérèse, now a doctor of the Church. Zélie and Louis were not declared “blessed” because of Thérèse. She became a saint because of them. They created an environment that invited her to holiness, and she responded freely to the invitation they offered her. They offer the same invitation to us and in this period between the two Synods in Rome, they are particularly important and welcome guests in our diocese.