We are delighted to announce that His Excellency Archbishop Antonio Mennini has kindly agreed to celebrate Mass in our church to celebrate the Solemnity of our Holy Father St Philip, on 26th May at 6pm.

Archbishop Mennini was previously the Holy Father's representative in the Russian Federation and Uzbekistan and arrived as Apostolic Nuncio to the United Kingdom in February.

The picture below shows His Excellency on his way to Buckingham Palace to present his credentials to Her Majesty the Queen, as ambassador to the Court of St James's. 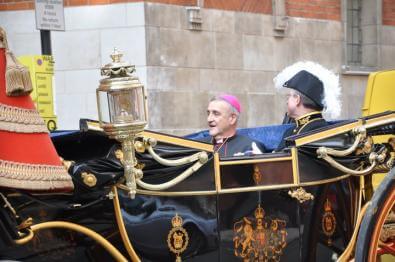