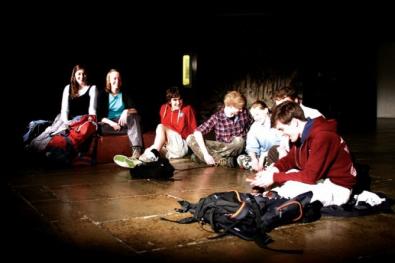 From the Catholic Herald:

Eager thespians at the Oxford Oratory are producing a new play in honour of the beatification of Pope John Paul II.

After successfully staging a play written by the Caldecott family in honour of the relics of St Thérèse of Lisieux, the Oratory parish is venturing to stage a new play at the Oxford University Catholic Chaplaincy called The Quality of Mercy. The play, which is written by Léonie Caldecott, centres around a group of young people who are hiking in the company of a mysterious stranger who calls himself Charlie. Tessa Caldecott is directing. Composer Ben Nicholls has written the music for the play and the choreography has been arranged by Anna Maria Mendell.

Greg Lippiatt, a 24-year-old graduate student, plays Karol Wojtyla and Fr Daniel Seward plays the Logos. The rest of the crew is played by actors attached to the Young Oratory aged between 16 and 25.

The play is set in the last week of Pope John Paul II's life. The central drama develops over seven days: Easter Monday to Divine Mercy Sunday. The presence of the dying Pope is always in the background. A chorus represents a scriptural dimension and punctuates the journey. The Easter week pilgrimage of these young people parallels that of the original disciples on the road to Emmaus, full of confusion and despair and then renewed hope as they encounter the Lord. As they travel, the young people discover things about God, their lives and themselves from their conversations with Charlie.

The play is a mixture of live action, symbolic sequences to music incorporating the words of John Paul II and choral speaking, which include Scripture passages re-worked by Dr Carl Schmitt of Balliol College.

Mrs Caldecott explained that the play aims "to be an experience which brings into vivid focus the meaning of Passiontide and Easter, and particularly on Divine Mercy as expressed in the encyclical Dives in Misericordia. Wojtyla saw the theatre as the ultimate art form for expressing the 'Logos'."

The play will be performed at 8pm from April 27 to 29 at the Oxford University Catholic Chaplaincy. Tickets cost £10 (£5 concessions) and are available at the Oxford Playhouse (01865 305305) or the from the Oxford Oratory Porters' Lodge.