We look forward to welcoming the Apostolic Nuncio, His Excellency Archbishop Antonio Mennini, on Thursday to celebrate the Solemn Mass for St Philip's Day at 6pm. 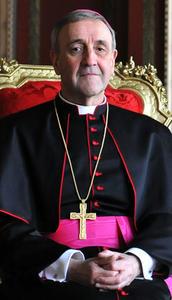 Born in Rome, Antonio Mennini was ordained to the priesthood on 14 December 1974. He has a doctorate in Theology.

Archbishop Mennini entered the diplomatic service of the Holy See in 1981, serving as an attaché in the Pontifical Representations in Uganda and Turkey, and then in the Council of Public Affairs of the Church of the Vatican Secretariat of State.

In 2000 he was made the Holy See's liaison with Bulgaria (2000-2002) where after arriving in Sofia he began preparing Blessed Pope John Paul II's 2002 pastoral visit.

On 8 July 2000, he was appointed Titular Archbishop of Ferentium by Pope John Paul II. Archbishop Mennini received his episcopal consecration on 12 September from Cardinal Angelo Sodano, with Cardinals Camillo Ruini and Jean-Louis Tauran serving as co-consecrators.

In 2002 he was posted to Russia and from 2008 to Uzbekistan. On 13 February 2010 President Dmitry Medvedev awarded the Nuncio the Order of Friendship for his contribution to the development of Russian-Vatican relations.

Archbishop Mennini was named Nuncio to Great Britain on 18 December 2010 following the early retirement of Archbishop Faustino Sainz Muñoz on 2 December 2010. As the new Apostolic Nuncio to the UK, Archbishop Antonio Mennini, presented his diplomatic papers to Her Majesty the Queen on 2 March 2011. 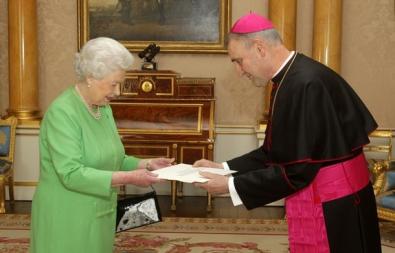