Work to start on Church Revamp

From the Oxford Mail: 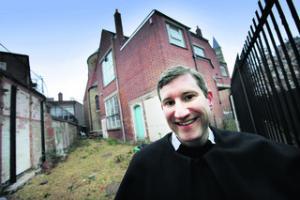 The next phase of a major £5m project to revamp one of Oxford's biggest churches is set to begin.

About £300,000 has already been spent on restoration to the sanctuary of the Oxford Oratory, one of just three Roman Catholic oratories in the country.

Now the first building work on the site in Woodstock Road will begin at the end of this month, with a new parish centre and library building, and new accommodation for priests based at the Oratory to be constructed.

Parish priest Father Daniel Seward said: "We have got too many Fathers living in the house.

"Some are actually living in the basement so we need to build new accommodation."

Five new rooms will be constructed, allowing an additional five priests to join the eight priests and one novice at the house.

The new library will house 10,000 volumes, including the archive of Roman Catholic convert, the author GK Chesterton.

The parish centre will include more facilities, including a kitchen and office.

This part of the work will be completed by the end of the year but further restoration, including a new chapel in memory of Blessed John Henry Newman, is set to be carried out in 2013.