Priest received at St Aloysius' died on the Titanic 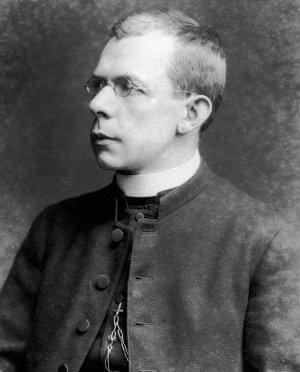 Today marks the centenary of the tragic sinking of the Titanic. Among the many who lost their lives was Fr Thomas Byles, parish priest of St Helen, Chipping Ongar, Essex. The son of a Congregationalist minister in Yorkshire, Thomas Byles was received into the Church here at St Aloysius', while he was an undergraduate at Balliol College. He was baptised "sub conditione" on 23rd May 1894 by Fr Joseph Martin SJ. Francis “Sligger” Urqhuart was his sponsor. After his priestly studies at Oscott, Ware and the Beda College, he was ordained in Rome in 1902. Initially he served at Gunnersbury, where he was one of the 5 founding members of the Catholic Missionary Society, being sent as Missioner to Ongar in 1905.

He was making the crossing to New York to celebrate the wedding of his brother William and his fiancée from Brooklyn.

A number of witnesses attest to his serenity and calmness amid the chaos- hearing confessions, giving blessings and doing what he could to comfort the terrified women and children into the lifeboats and it is said twice refused a place in the lifeboat. He was last seen gathering a group of men around him and leading them in the Rosary.

More information may be found at fatherbyles.com.