This year's Paschal Candle, beautifully decorated as ever by Freddie Quartley, brings out themes from the Year of Faith. 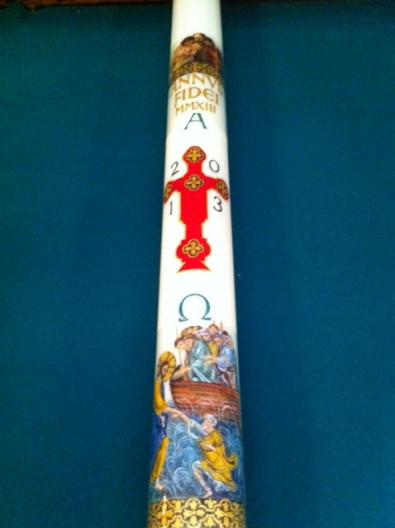 At the bottom of the candle we see St Peter being held up by the Lord as he walks across the Sea of Galilee:

"And the disciples, seeing him walking on the sea, were troubled, saying, It is an apparition. And they cried out through fear. But Jesus immediately spoke to them, saying, "Take courage; it is I: be not afraid."

And Peter answering him said, Lord, if it be you, command me to come to you upon the waters. And he said, Come. And Peter, having descended from the ship, walked upon the waters to go to Jesus. But seeing the wind strong he was afraid; and beginning to sink he cried out, saying, "Lord, save me." And immediately Jesus stretched out his hand and caught hold of him, and says to him, "O you of little faith, why did you doubt?" And when they had gone up into the ship, the wind fell. But those in the ship came and did homage to him, saying, "Truly you are God's Son."" (Matthew 14: 26-32) 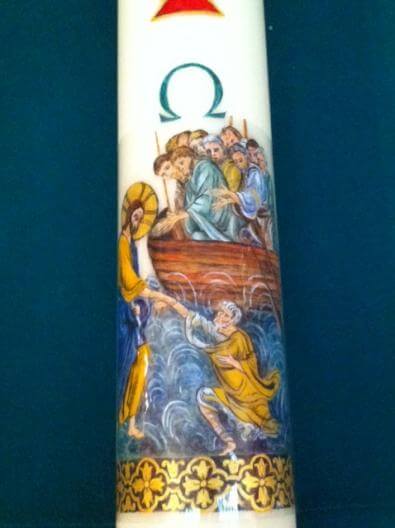 The picture at the top of the candle shows St Thomas putting his hand into the Lord's wounds:

"And after eight days again his disciples were within, and Thomas with them. Jesus came, the doors being shut, and stood in the midst, and said: "Peace be to you." Then he said to Thomas: "Put in your finger here, and see my hands; and bring here your hand, and put it into my side; and be not faithless, but believing." Thomas answered, and said to him: "My Lord, and my God." Jesus said to him: "Because you have seen me, Thomas, you have believed: blessed are they that have not seen, and have believed."" 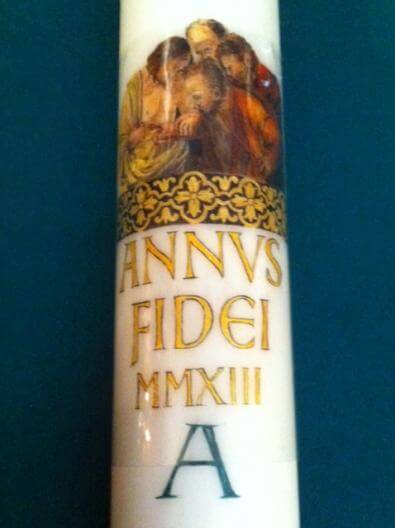