News > Archive > Pope Francis urges all the faithful to make time for Eucharistic Adoration this Sunday.

Pope Francis urges all the faithful to make time for Eucharistic Adoration this Sunday. 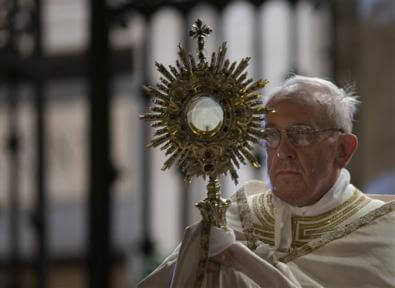 The Catholic world will be united with Pope Francis on the Feast of Corpus Christi as he leads an “historic” hour of simultaneous Eucharistic Adoration.

“Even some islands in the middle of the ocean … at two in the morning – they don’t have electricity – but even with that they will be in communion with us and Pope Francis for one hour,” Archbishop Rino Fisichella said as he explained the intense reaction he is seeing to the event timetabled for 2nd June.

“I am proud to say that this is a historical moment for the history of the Church because for one hour all the churches in the world will be united. … We are united because the Eucharistic makes us all one body and one spirit, so we enter into the deepest meaning of the Eucharist,” the archbishop said.

Archbishop Fisichella, who leads the Pontifical Council for Promoting New Evangelization, said that the strong response to the event did not surprise him because he has seen “an increasing number of people engaged in adoration” in recent years.

HOW TO DO THIS IN OXFORD?

The Deanery Corpus Christi Procession will coincide with the time Pope Francis has asked us to spend in adoration. It begins from the Oratory at 2.30pm. Please wear uniforms, academic dress, first communion outfits etc. We will stop at Blackfriars for a sermon by Fr Robert Ombres, O.P., and then continue to the University Chaplaincy, where there will be Benediction and then tea.